Home Blog A Creative in Corporate: 1. The Adjustment
Blog

A Creative in Corporate: 1. The Adjustment 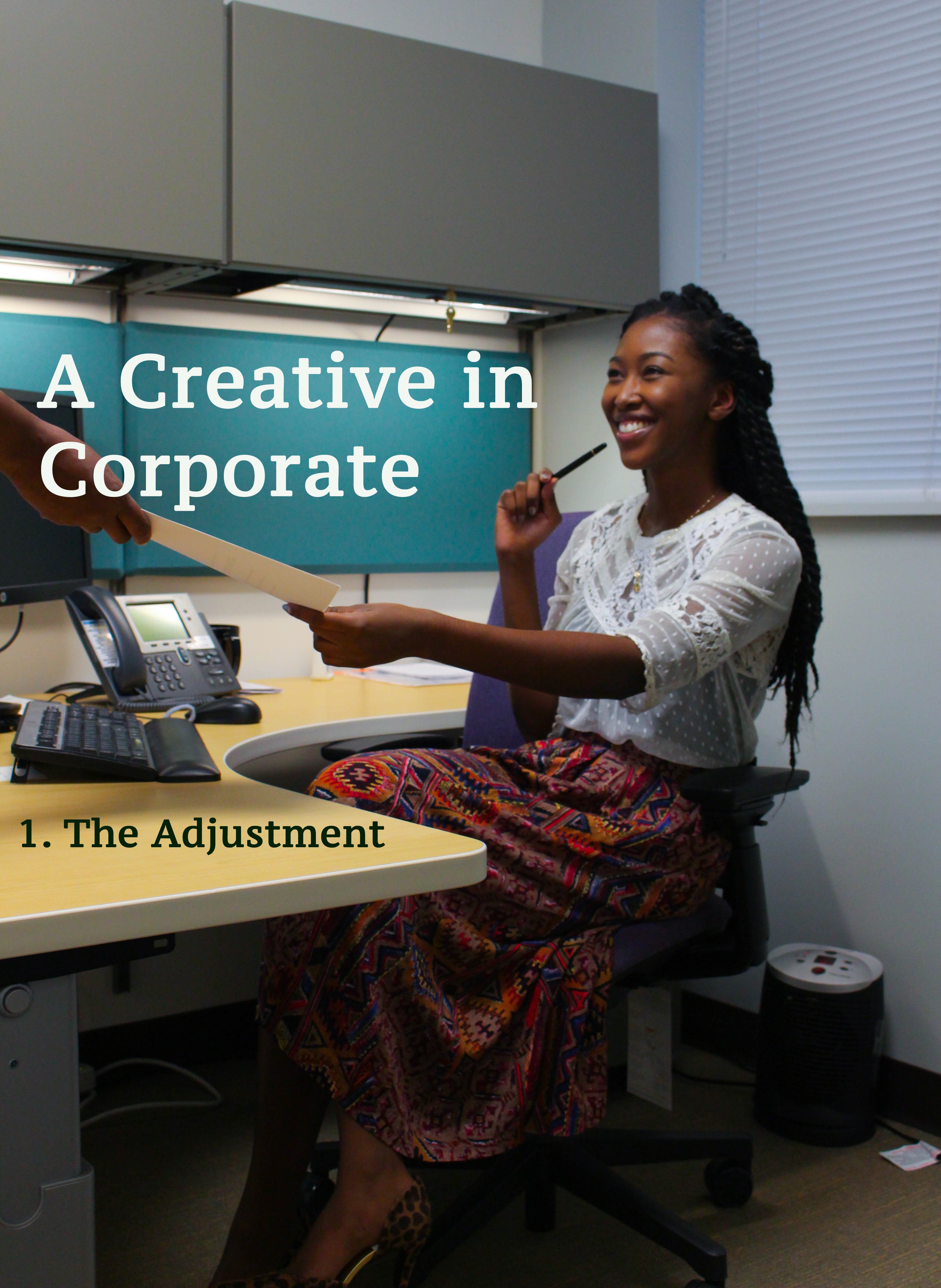 It’s May 15, 2017. My alarm goes off at 6am and I gingerly open my eyes. Still laying in bed I think, “This is it. My first day going to a real job. Corporate. 40 hours. Okay… I can do this.” Rolling out of bed I went through the routine and put on the business casual attire that I had carefully selected the night before. As I picked up the lunch that my mom was kind enough to make for me I looked at my phone to check the time. 7:10am. I was supposed to report to work at 8am so I figured that I would have plenty of time. Sitting in my car, I put the address into the GPS and my heart dropped. Google maps stated my ETA for 8:05am.

I had never backed out of my driveway so quickly.

I know what you’re thinking, “Why didn’t she check to see how long the trip was going to take?” I did. Multiple times in fact, but I never even considered to check the trip time during the morning rush hour. In fact, I’m sure that I was never awake during those hours to even think about checking it then.

I arrived at 8:10 (Google maps is never accurate during rush hour). I hurriedly found parking then rushed into the building. Thankfully I didn’t miss anything as the morning consisted of an incoming Intern reception consisting of a light breakfast and very general orientation of the company. Following the reception the Interns split up based upon our department and ate lunch. We received a tour of our floor, met our managers, and for the remainder of the day began the process of getting our laptops and access to various applications. At the end of the day I went home, tired, and bought a Chic-fil-A sandwich as a gift to myself for surviving the first day.

Remainder of the week

I had really bad car sickness from the commute resulting in horrible nausea. That Chic-fil-A sandwich that I bought took about two days to eat… two days. I had no appetite.

Leaving work on Wednesday I put in my home address and received an ETA of 6PM from Google maps. As I began the drive my ETA began to get longer and longer… seeing that the time had reached 6:40PM I broke down crying as I drove on highway I-285 for a little over 30 minutes. All of my emotions had hit me at once. It had finally sunk in that this commute was going to be a daily thing. I was going to get home close to 7PM every single day. I had to sleep at 10:30PM to stay awake at work so that left about 3 hours in my day to complete everything else that I wanted to do. I felt that this was no life to live. Where was my personal time? Needless to say, I broke.

At the end of the week I stepped back and took a look at my life. The actual internship was cool, but the lack of “me” time was a hard concept for me to deal with. The real world was finally at my doorstep and it hit… hard. However, I was determined to make the best of my situation and figure things out. So that’s exactly what I did.

In the following weeks I downloaded the app WAZE which shortened my commute home to only an hour. I also began wearing a wristband made for seasickness and eating these weird ginger candies that my mom gave me which cut the nausea so my appetite slowly but surely began to improve. During my commute I would play a youtube video or call friend to make the trip more enjoyable. By making adjustments things got better. Oddly enough, I now feel like I have a decent amount of time when I go home to get things done. At the end of the day I guess it’s really about perspective and using the time that you do have efficiently. You can’t always change your situation right away, but you can adjust how you react to it. If I had decided to remain sad those emotions would’ve taken a toll on me personally and my family. Making the decision to be happy gives me an internal lightness and affects those around me positively as well. It’s not easy every day, but your mood is a constant choice which develops into your ‘personality’. I recommend that you all look at the positives and choose happiness.

A Creative in Corporate: An Introduction

A Creative in Corporate: 2. Work towards your dreams

A Creative in Corporate: 2. Work towards...

How many times has a quarter changed...

Podcast Ep 5. “How to Overcome Limiting...

A Creative in Corporate: 5. Mentorship

Podcast Ep 3. “The Power of Perspective...

A Creative in Corporate: An Introduction

Podcast Ep 4. “Mindfulness and Creating the...

A Creative in Corporate: 4. Research, then...

No images found!
Try some other hashtag or username